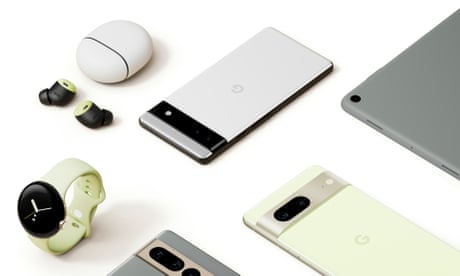 Google has announced a series of new products as it looks to compete with Apple on tablets and smartwatches. It has unveiled a lower-cost smartphone, high-end earbuds and a watch due later this year, as well as Android updates.

During the keynote kicking off its IO developer conference, Google set out its intention to build a broader collection of own-brand devices rather than rely on third parties such as Samsung using its software.

Google announced its first Bluetooth earbuds with noise cancelling, called the Pixel Buds Pro, which will ship on 28 July costing ú179 ($199/A$299).

The Buds Pro can connect to two Bluetooth devices at once, such as a phone for calls and a laptop for music, including iPhones, Macs and PCs. They last up to seven hours with noise cancelling, and up to 20 hours with their charging case.

Google showed off its first own-brand WearOS smartwatch, called the Pixel Watch, which will ship in the autumn. It has a round, domed design, is made of recycled stainless steel, and has optional 4G connectivity. It features various Google apps and services including Assistant, Maps and Pay, and the Play Store for third-party apps.

Google showed off some new software features coming later this year, including the ability to request removal of search results containing your contact details, automatic summarisation of key points in Google Docs and Chat, and the ability to speak to Google Assistant just by looking at the Nest Hub Max smart display.

Later this year Google Maps will gain a new immersive view, which combines street and aerial images to create digital models of cities including London, Los Angeles and New York. Users will be able to virtually walk through the cities at various times of the day with information overlaid, such as weather conditions, traffic and how busy a place is.

Android 13 will also be released in the summer as a free update, bringing with it greater customisation and privacy options including the ability to force apps to ask whether they can send you notifications before doing so, similar to iOS, and further restrictions to location access for apps.